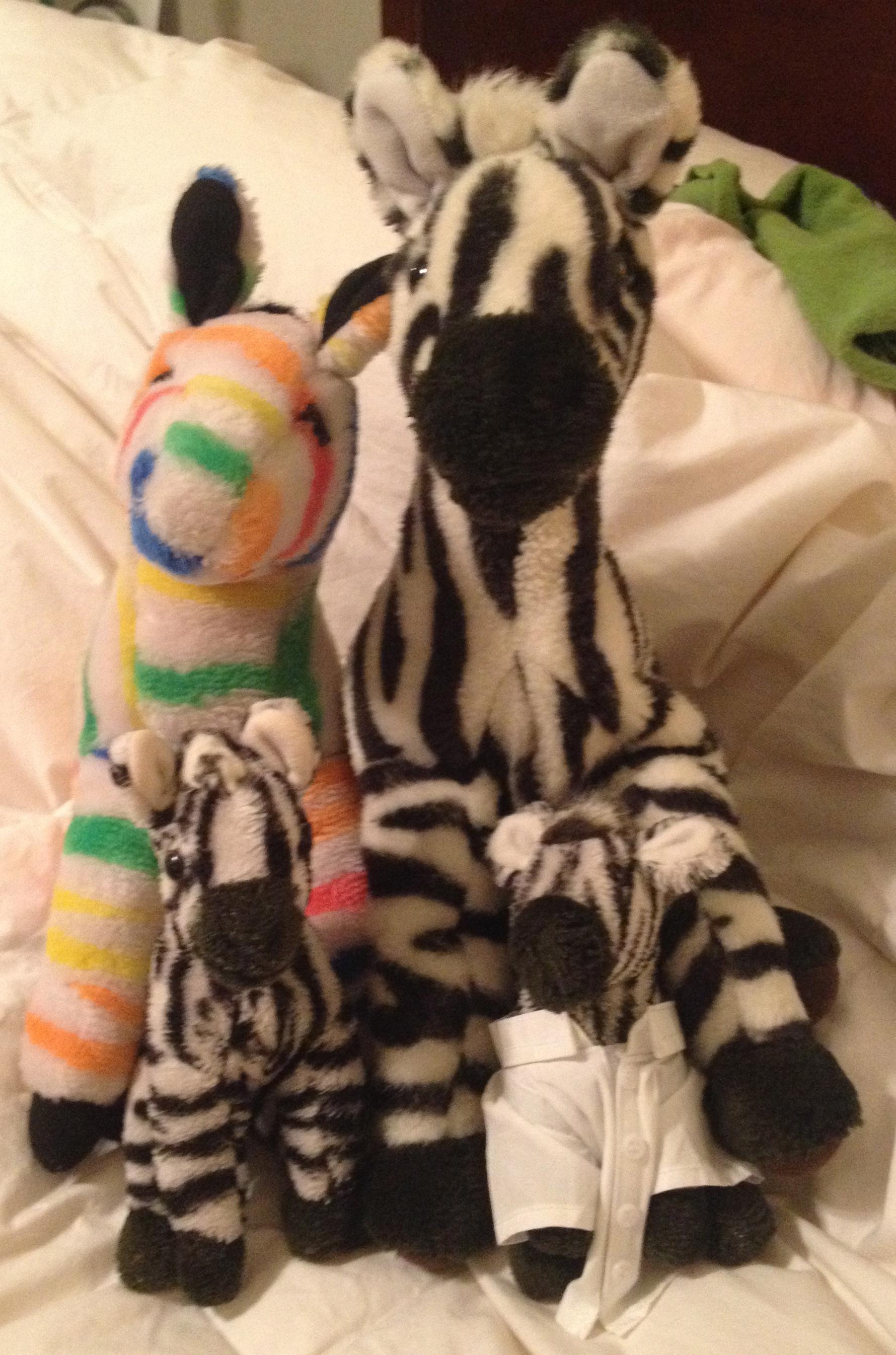 Zippy puts his shrill voice and boundless energy to good use as a striped alarm clock. One time, Thomas overslept and missed the school bus. It was a small disaster because he had to get dressed in a hurry, didn’t have time to eat all of his breakfast, and missed some of the school day. Zippy saw that all this ruined Thomas’ morning. Even though Zippy is sort of a maniac, he is very loyal and loving, always wanting to help his friends. So after that morning, Zippy became Thomas’ alarm clock and would wake up early and then yell, “THE BUSSSSS! THE BUSSS IS COMING! YOU CANT MISS THE BUSSSSS!!!!!”

The first time he did it, it surprised everyone in the house because we didn’t know Zippy had decided to be an alarm clock. Needless to say, we were all ready on time that day. After a while, we all got used to Zippy screaming about the bus every day and it became part of the morning routine. We were glad that Zippy made sure we were all awake on time. However, it took a long time for Zippy to understand that the school bus didn’t come on Saturdays and Sundays.

I could write pages and pages and take up the whole internet writing stories about Zippy and his strange proclivities. Here are a few more examples of the unusual things that are part of everyday life with Zippy the Zebra.

Zippy is interested in extreme weather and feels that he has some control over these natural forces. Sometimes he yells at the sky when it thunders, demanding that the storm go away. When there is a dry spell of no rainfall, Zippy will wear an elaborate headdress and begin rain-dancing to convince the clouds to quench the parched land. Zippy’s rain dances involve a lot of yelling, spinning, head tossing, stomping and drumming on the ground with his rear end (yes, you read that right). It is truly a sight to behold! My brothers and I have to steer clear of his epic rain-dances because he thinks it’s a good idea to push us over on our backs and spin us around on our shells as part of the dance. All that twirling is just too much for a turtle and we end up feeling dizzy and queasy. Zippy says this is “suffering for our art”, but I’m not convinced that the weather has ever actually changed as a result of Zippy’s dancing.

Since he is an unruly guy, Zippy likes to play rough. As a tough-shelled turtle, I’m usually up for some horsing around, but Zippy takes it to a new level! He and Thomas often have weekend wrestling matches that they call “Friday Nigh Fight!” I think Zippy usually gets the best of Thomas in these bouts of rolling around, grunting, bear hugging, yelling, jumping, running and pillow fighting. I think it’s because Zippy would pass gas and knock Thomas out! We always know one of these matches is about to begin because Zippy will climb up to a high place, like to top of the sofa or the headboard of the bed and yell “FRIDAY NIGHT FIGHT!!!” at the top of his lungs before jumping on top of Thomas, knocking him down. That’s our cue to run for our lives so we don’t get caught up in the melee! Sometimes the family has to help Zippy calm down so no one gets hurt!

Beneath his “tough guy” exterior, Zippy is a ‘mama’s-boy’. Whenever Zippy isn’t quite getting his way (which is often because the rest of us are always hesitant about his weird ideas), he says “My Mama said!” as a reason why we should follow his lead. He says this even when his Mama, a very kind and patient rainbow Zebra named Yipes, is not around. A funny thing happened one day when Zippy wanted all of us to help him open all the boxes of pasta in Big Mama’s kitchen to make a giant macaroni necklace to go around the whole house. Fivie, New Greenie and I didn’t think Big Mama would appreciate us using up all the pasta, so we told Zippy that we didn’t think this was a good idea. Zippy argued that it was a fantastic idea and the Big Mama would be excited to see a giant necklace around the whole house. With that, he headed toward the kitchen and said “Come On! Let’s go make some art!” We just weren’t sure. Zippy shouted “My Mama said we could do it!” That was when we heard Yipes come around the corner from the other room saying, “Zippy, what did I say?” We three Greenies tried not to laugh as Zippy’s eyes got big and he froze in his tracks. His mama caught him!

Yipes said, “Zippy, I heard you say that I said it was OK to take Big Mama’s pasta when I did not say that at all. Why did you tell the Greenies that?”

Zippy didn’t know what to do, so he burst into tears. Yipes sighed and told him to calm down. “Zippy, it is very rude to put words in my mouth. I did not give you permission to take Big Mama’s things. It’s not OK to proclaim that I said something that I didn’t say just to get your way. Also, the three Greenies are right. It’s important to ask Big Mama about using her pasta for your art project. After all, it’s the family’s food. I think you should stay with me for the rest of the day today.”

It was too bad that Zippy got into trouble, but at least he didn’t get all of us into trouble that day! Like I said, Zippy is kind of bonkers, but he’s part of our gang and we like him and his big ideas!