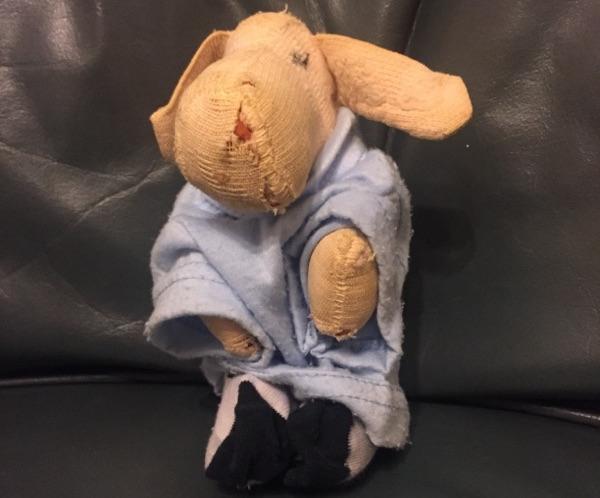 Everything I need to know about life, I learned from a little pink plush dog named Baby Stinky. Actually I think his full name is Baby Stinky Floppy the Dog, at least that’s what he said was the name given to him upon baptism. I’m not sure if he was actually baptized so much as he kind of fell into the toilet when he was drinking out of it and splashed around a bit.

Anyway, Baby Stinky has been my best friend, mentor and confidant since day one! He is the Yoda to my Luke Skywalker. He helped me become the turtle I am today!

No one really knows how old Stinky is, but he has been around for a very long time, much longer than me. He is Big Mama’s special toy since she was a little girl and he’s seen it all. He was a Christmas gift to Big Mama when she was around ten years old. He was wrapped as a present under the tree and everything! Sometimes Baby Stinky drops hints that he has actually met Santa, but he refuses to divulge the details. That is the only thing about Stinky that drives me nuts! Gaining intelligence on Santa Claus is very important to me, but that’s the subject of another blog.

On that long-ago Christmas, Baby Stinky was pink and fuzzy with a cute little nose and bright eyes. He grew up with Big Mama and her family in New York. When he’s feeling cantankerous, he tells stories about the mean streets of The Big Apple. I don’t think he ever even rode the subway, but I won’t tell anyone that. Stinky is my friend and we like to play along on each other’s ruses.

Baby Stinky quickly established himself as the main instigator among the toys at Big Mama’s childhood home. He got into all kinds of scraps and adventures, quickly earning a reputation as a troublemaker. Stinky didn’t care. He knew his antics entertained Big Mama (maybe she was only a Little Mama back then) and made her laugh. The more he acted up, the more she loved it! That’s how he found the key to the good life. It was a dog’s life and Baby Stinky was lapping it up! To this day, he says the being a “goody-two-shoes” is how stuffed toys get ignored. He says the plucky guy gets all the kisses, treats and belly-rubs. Words to live by, if you ask me!

As time went on, Stinky went to college with Big Mama, which is pretty impressive when you consider that he was an obedience school dropout. As she became a grown up and started a family of her own, Baby Stinky was by her side. By the time I met Stinky, many years later, most of his pink fur had been loved away and he looked a little rough and bald. He didn’t let that slow him down. Baby Stinky was still the fast-talking, connection-making, scheme-planning pup who was much-loved, well-fed and always dodged the blame. He was already well established as Big Mama’s special guy and had already gotten to know my Mama (who was a baby at the time) when I arrived on the scene. He liked my Mama, but she had already started to play too rough with him and accidentally bit off one of his eyes. Big Mama quickly repaired him, but Baby Stinky knew he was no match for another round of early childhood.

When I showed up, I was a tiny, frightened baby turtle fresh from the toy store and didn’t know what to do except to stay close to my Mama. Early on, when Big Mama was taking pictures of my Mama, I made sure I was in every frame. Even then, I knew I liked getting attention and feeling like a big shot! Baby Stinky must have seen some potential in me because he trotted up to me, licked my face with his big pink tongue and he took me under his paw.

He taught me all the important things he knew, such as the delicious fun of eating foods that make you gassy, such as beans and peanut butter! He taught me that breaking wind was fun and a good way to make some space when play-time got a little too rough. He showed me how to take initiative and find my own way around because it was key to having the run of the house. He coached me to stand up for myself. If I was going to be the top turtle, I couldn’t take any guff. By watching Baby Stinky, I became comfortable with the idea that hard work isn’t for everybody, especially me. Sometimes it’s more important to be in charge and let someone else do the heavy lifting. A good lesson was when Baby Stinky told me to always lick the ones you love. Showing affection early and often is the secret to being forgiven quickly when you’re a rascal.

Of all the lessons Baby Stinky taught me, the most important one was when he gave me a serious look one day and said, “Looks aren’t anything, you know.” He said this after I commented on his hairless pate and drawn-on eyes. After being Big Mama’s favorite toy, then being an important part of my Mama and her brother’s childhoods, Baby Stinky was a little worse for wear. He explained how the things that made him look a little funny on the outside were evidence of the beautiful life he lived.

“I look like this because Big Mama loves me for so many years. Now your mama loves me. Your mama’s brother loves me. They all play with me and hug me and kiss me. I’m like a real dog to all of them. Look, it’s happening to you, too.” He explained as he pointed to my worn out feet and flattened fur. He was right! My mama played with me and kissed and hugged me. When we played, I got dirty and had to be washed. I was starting to look different.

“What will happen to us?” I asked Baby Stinky with growing concern.

“Everything!” He exclaimed. “It’s going to be great! Loving your kid is the best thing toys like us could ever wish for. Sure you take your lumps when they are small, but we get to live the sweet life we are older and our kid is grown up.” He said. I thought I understood.

Baby Stinky went on, “There’s a story about a toy like us. It’s about a fuzzy bunny that is loved so much by his little boy and one day, he becomes real. We’re like that. We’re real.”

The more I thought about it, the more I realized that he was right.

“So, our job is to grow up with our kid and we become real?” I asked.

All my life, I have learned and played alongside Mama. I’m excited when she is. When she’s happy, I’m happy. And when she’s sad, I’m there to comfort her. Even then, I knew it would be a big job, but I already liked it. I had one more important question for Baby Stinky.

“Stinky, what happens when Mama grows up? What will my job be then?” I asked.

“Oh, then you have another important job. You have to teach the next generation of toys all the secrets of life that you learned, just like I’m teaching you!” He said. “Now, come one…I want to show you how to dial the phone. It’s a lot of fun to call people. There’s a lady named “Greta” that I like to prank call and bark at.”

That conversation happened a long, long time ago, but I still remember it like it was yesterday. Now, my Mama is all grown up. I know she still loves me very much. And just like Stinky said, I’ve been teaching the secrets of the good life to new toys all along. As for Baby Stinky, he says he’s retired and he’s taking it easy these days. We still have fun together and he takes a lot of naps, but still loves to eat beans. He says that when you get older, it’s important to be able to clear the room so you can relax in the most comfortable spot. I guess some things never change. Even though he is supposedly retired, I catch him taking a new toy under his paw once in a while and telling them his secrets just like he told me. All the other toys feel very special when he teaches them. They call him “The Great One” because began all the fun and mischief in our little family.

Sometimes when it’s just me and Stinky, we reminisce about the day we discussed the secret of a favorite toy’s life. Then we look at our threadbare fur, crooked stiches and patched hides and we laugh and laugh. We may look funny, be we know for sure that we are loved and we are real. We laugh some more as we recount our adventures. Then I get serious and ask Stinky, “Did you really meet Santa?” 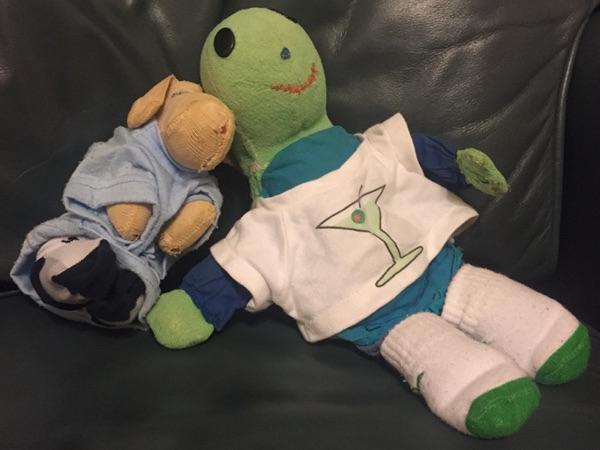