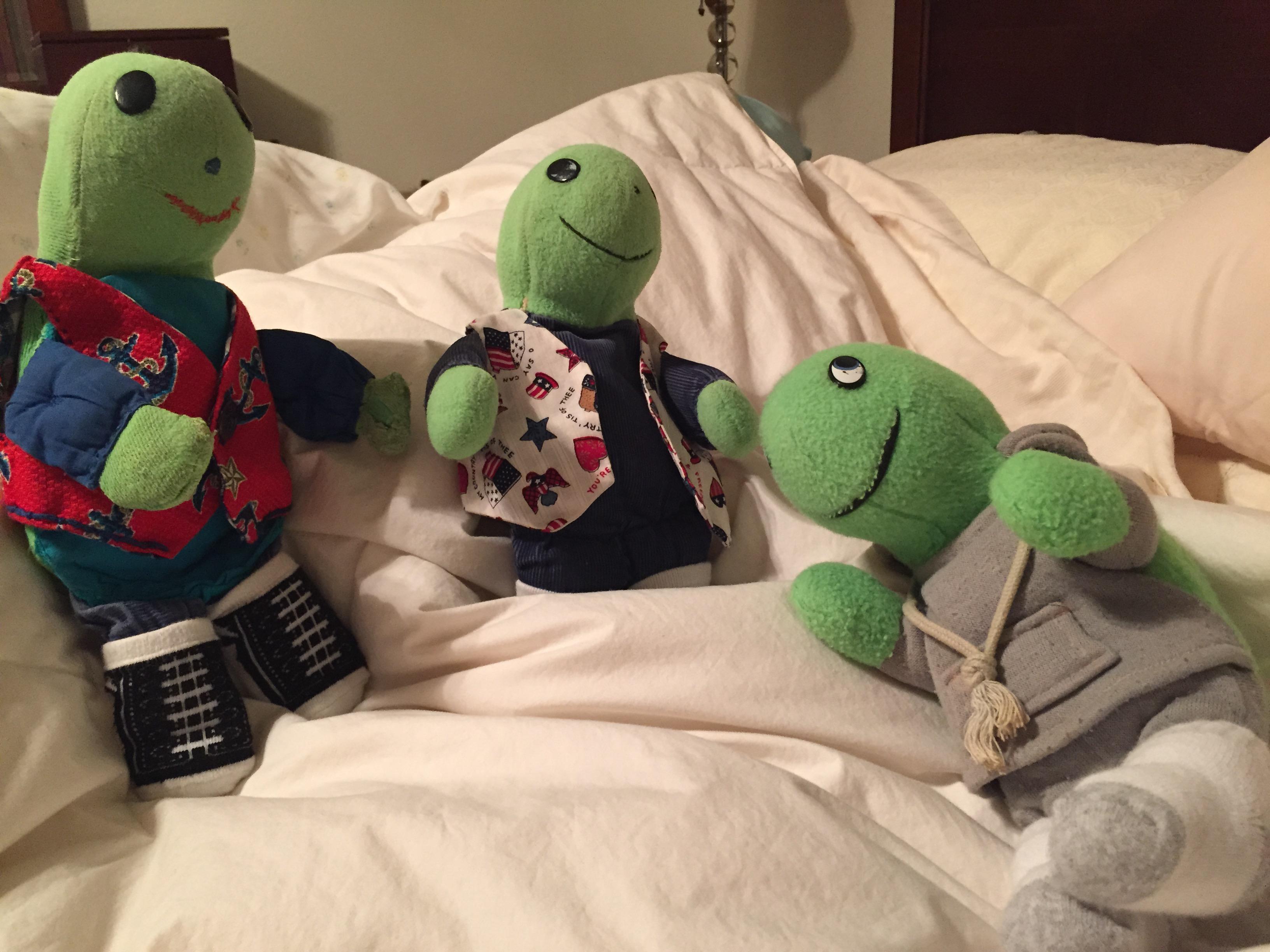 Here we go again! There’s a big storm outside with lots of scary thunder and lightning and I’m hiding under the covers of my big bed! I don’t like thunder because it’s so big and scary. It feels like I’ve been hiding for a long time while I wait for the storm to go away. It finally does and I hear my brothers jumping around on the bed and calling my name.

“Baby Greenie? Baby Greenie, where are you? Are you hiding from thunder again?”

“Yes!” I reply as I crawl out from the mountain of covers to jump on the bed with them. I’m so relieved that the thunder is gone.

“Baby Greenie, why are you so afraid of thunder? It can’t hurt you.” Said my brother, Fivie.

“It’s scary! It’s so big and loud. It must be something gigantic and mean that is coming to get me!” I exclaimed as I started to pull the covers over my head again. Just thinking about the thunder makes me quake in my shell all over again.

Fivie scratched his head as he considered my imaginative explanation. New Greenie giggled as he jumped.

Then Fivie shared his idea of what thunder was. He said, ”I don’t think it’s monsters or anything scary. It reminds me of the sound a bowling ball makes as it goes down the lane to knock over the bowling pins. Maybe thunder is the sound of bowling in heaven…” He trailed off as he imagined the bowling game in the sky. I cringed and blurted, “Great! Now the big scary thunder monsters have a bowling league??” I pulled the blanket over my eyes again.

New Greenie’s giggle had turned into an uproar of laughter. I heard the ‘plonk’ sound of him falling back onto his shell because he was laughing so hard. As his peals of laughter died down, he began to explain his thoughts on thunder, and why he thought Fivie and my ideas were so hilarious.

“No, it’s not bowling in heaven.” Stated New Greenie with a giggle. New Greenie went on to explain, “You’re both silly. Thunder is a sound caused by lightning. As lightning strikes, it creates a sudden increase in pressure and temperature, which produces rapid expansion of the air close to the bolt of lightning. The rapid expansion of air creates a sonic shock wave, just like a sonic boom. The shock wave reaches our ears as the sound of thunder. It’s not monsters or bowling! It’s just the weather.”

“What are you, some kind of weather-turtle?” I asked, sarcastically.

“It’s not a weather-turtle or a weather man. It’s a meteorologist, dummy!” New Greenie countered before he continued. “Did you know that the distance of the lightning can be calculated when you hear thunder? “

“You can?” Asked Fivie, with interest.

“Yes, instead of hiding under the covers like a scaredy-turtle when it thunders, you can count the seconds from the time you see the lightning to the time you hear the thunder. Then you can divide the time between the flash and the thunder by five, you get the number of miles away the flash is! You can have a grown up or a calculator help you with the math if you don’t know how to divide, yet.”

“That’s easy to remember because it’s my favorite number, FIVE!” shouted Fivie as he resumed jumping on the bed.

A few days later, another big storm rolled into town and we were able to watch the lightning through the window and we calculated how far each lightning strike was using Mama’s calculator. My brothers and I had a lot of fun. The thunder is still big and loud, but I’m not as scared as I was before. I was having too much fun with my brothers being turtle meteorologists. Now that I know what thunder really is, I can be brave. 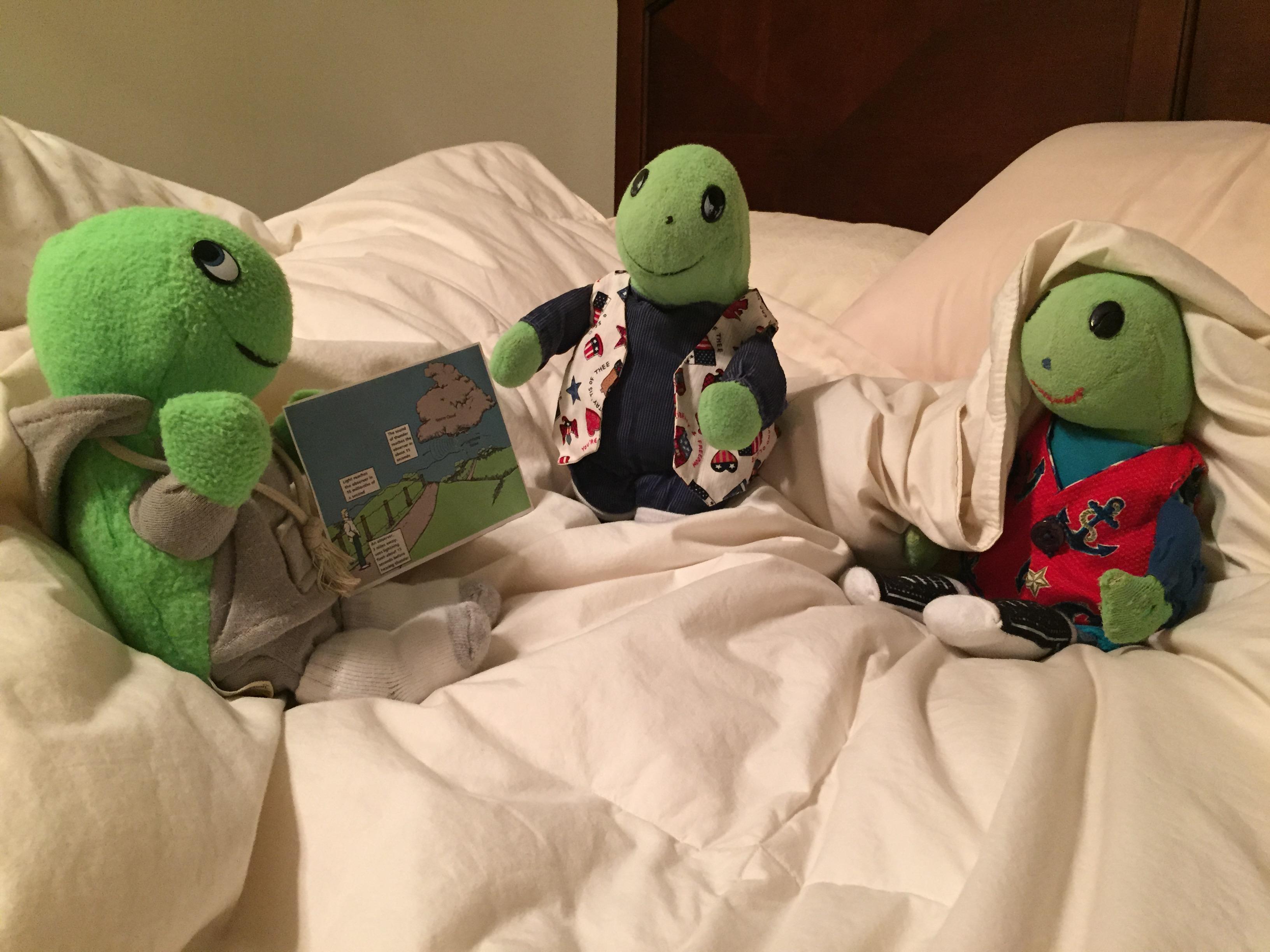