Why Is the World Always on the Back of a Turtle? 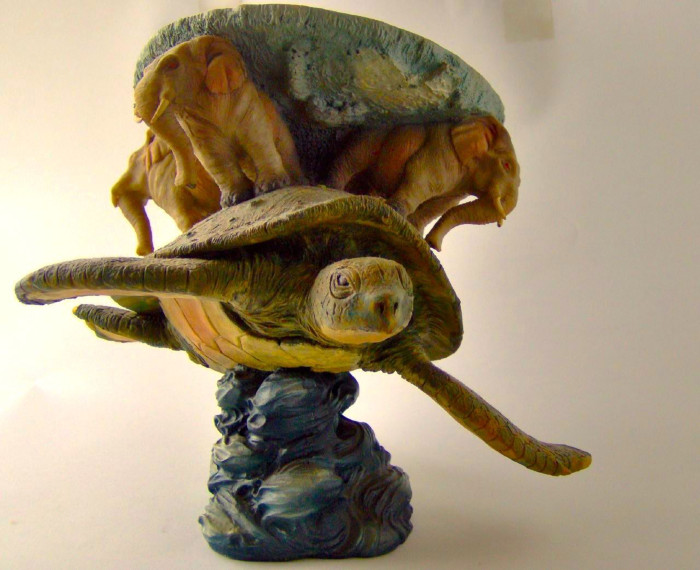 Anyne who has ever heard the expression “it’s turtles all the way down” is probably familiar with the image of the world being carried on the back of a giant turtle. While that philosophical one-liner is of relatively modern vintage, the cosmic turtle mytheme has appeared in disparate cultures across the globe for millennia.

In honor of everyone’s favorite intellectual quandary, let’s take a moment to celebrate the tortoises that hold up the world.

In his book Researches Into the Early History of Mankind and the Development of Civilization, the turn-of-the-20th-century anthropologist Edward Burnett Tylor writes that the world turtle concept likely first appeared in Hindu mythology. In one Vedic story, the form of the god Vishnu’s second avatar, Kurma, is a great turtle, which provides a celestial foundation upon which a mountain is balanced.

Over in China, part of the traditional creation mythology involves a giant turtle named Ao, although the image in this case is a bit different. According to the legend, the creator goddess cut off the legs of the cosmic turtle and used them to prop up the heavens, which had been damaged by another god. It’s not quite carrying the world on its back, but it still puts a terrapin at the center of the universe, making sure that the very sky doesn’t fall down.

The concept of a world turtle seems to have arisen independently within Native American myth and legend. In the creation stories of the Lenape and Iroquois people, the Earth is created as soil is piled on the back of a great sea turtle that continues to grow until it is carrying the entire world. Many indigenous tribes in North America refer to the continent as Turtle Island to this day.

The image of the world being carried through space by an ancient, impossibly massive tortoise is evocative, so it’s not hard to imagine why it has survived for so long in so many different cultures. But in the end, why turtles?

Read more from our friends at Atlas Obscura