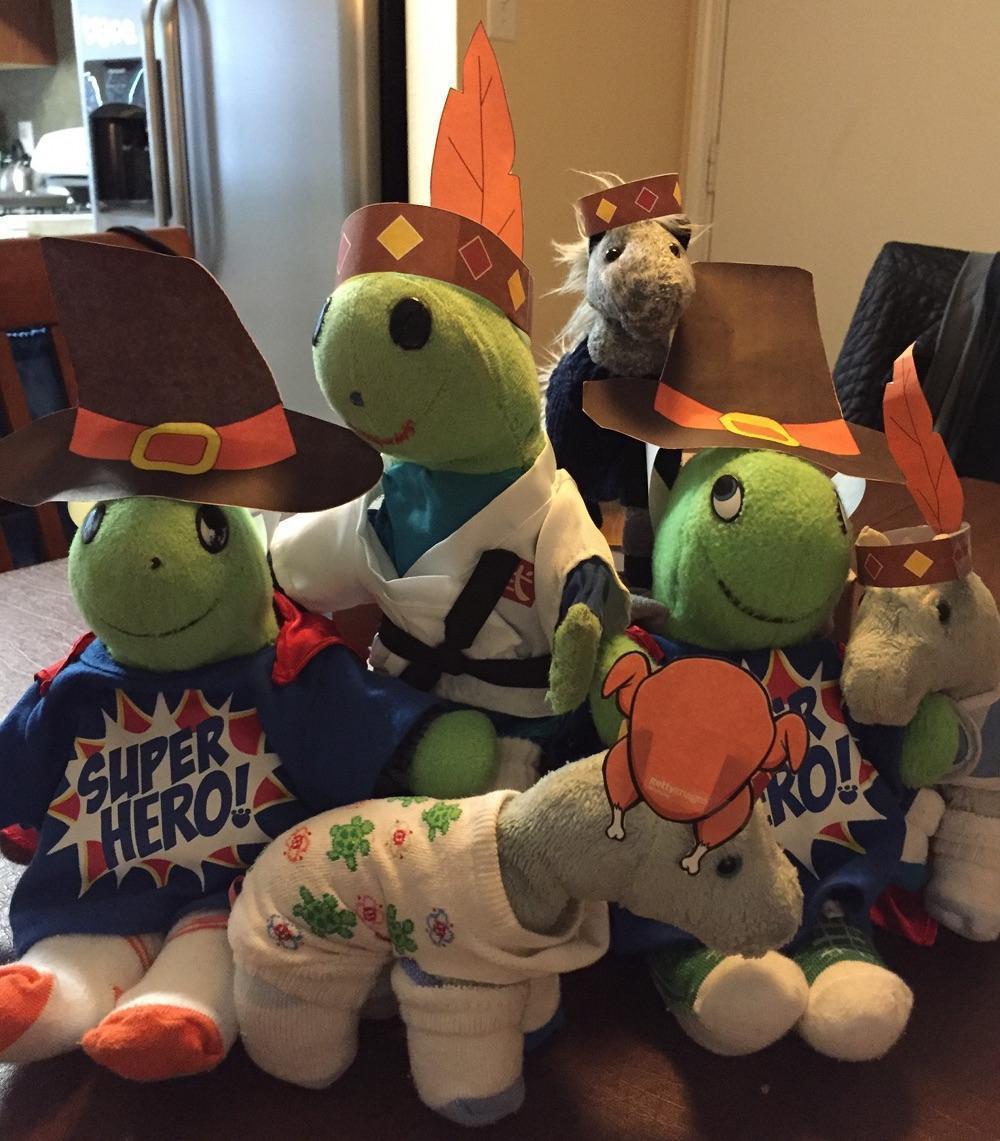 I love Thanksgiving! Truth be told, I like any holiday that involves food! There are so many good things to taste at Thanksgiving. My other favorite thing about Thanksgiving is that my whole family gets together to cook, eat, talk and play. I think that’s pretty great. I also like Thanksgiving because there are parades.

There’s a parade I like to watch on TV that has balloons, marching bands, singing, dancing and my favorite cartoon characters. What really makes this parade special is that Santa Clause is at the end of the parade with his sleigh and reindeer every year! I think it’s really nice of Santa to show up at the parade even though it’s the busiest time of year at the North Pole. Maybe some day I will go to that parade so I can get up close to Santa. I’ve been trying to catch up with him for years, but I’ll tell you more about that in my next blog

This year, for Thanksgiving, my brothers and I are wearing special hats. We have Pilgrim style hats and Native American style hats. My Mama says to call them Native Americans and not Indians because Indians are from India and Native Americans are from America. She also says that Christopher Columbus and all the other explorers that came to the New World made a mistake when they called them Indians. The explorers were just learning that the Earth was a round sphere, not flat. They thought that if the world was round, that meant they would sail all the way around and end up in China or India. They didn’t know that the New World would be there. It was a big surprise! The “New World” is what they first called the North American and South American continents. I guess they called it that because it was new to them, even though it had been there all along.

My Mama knows a lot about history and says there are a lot of funny little stories like that throughout. For now, I want to get back to the Pilgrims and Native Americans. My brothers and I are wearing the hats so we can tell the Thanksgiving story. Have you heard the Thanksgiving story? If not, I will tell you.

A very, very long time ago, before America was a country, some Pilgrims left England and came to the New World seeking religious freedom. They came across the ocean on a big ship named the Mayflower. There were 101 men, women, and children who spent 66 days aboard the ship, traveling the Atlantic Ocean. It was a long and dangerous ride. They arrived in shore in what is now Massachusetts in 1620. I lived in Massachusetts once, but I didn’t meet any Pilgrims.

When the Pilgrims came ashore, they marked the date on a big rock called Plymouth Rock. They arrived in the New World to start a new life. It was very hard because the wintertime was cold and harsh. It was almost impossible to grow crops in such conditions. On top of that, they were in a new place and probably didn’t know much about the land, the weather and what kind of crops grew best there. Also, they couldn’t bring many farm animals over on the ship, so they didn’t have the food sources and work animals they were used to. The living conditions were very hard and many people got sick and some even died. It was a terrible time.

Then a Native American named Squanto befriended the Pilgrims. Some history books say his name was really Samoset. I’m not sure which is true. Maybe there were two guys and some confusion, or maybe the Pilgrims were just really bad with names. Anyway, Squanto/Samoset had known some people from Europe so he spoke a little English and was able to teach the newcomers some good tricks to make their crops grow better. He also taught them how the Native Americans hunted and fished in the surrounding woods and waters. The Native Americans had already been there for thousands of years, so they knew the lay of the land, so to speak. This is how the Pilgrims learned to grow crops like pumpkins and corn (but they called it maize – I’m not sure why they had weird names for everything).

Squanto/Samoset and his people taught them a neat trick for growing healthy crops. He showed them how to put a dead fish in the ground beneath where they planted their seeds. As the fish decayed, it added nutrients to the ground that made the crops grow big and strong. Since the fish were buried in the dirt, no one could tell if they smelled bad when they rotted. After a while, the Pilgrims got the hang of it and started doing well in the new land.

Since the Pilgrims had such a long, arduous journey, a harsh winter and a hard time getting started in the new world, they were very grateful after their first bountiful harvest. So they decided to throw a big party to celebrate and show their appreciation for the help Squanto/Samoset and the Wampanoag tribe gave them. The Pilgrims and Wampanoag people feasted on favorite foods, played games, sang, danced and swapped stories for three days! The food back then was a little different than today’s traditional Thanksgiving fare. At the first Thanksgiving, they ate deer meat, corn, shellfish, and roasted meat. All that sounds pretty good to me, but I would have missed the turkey and pumpkin pie.

That is the story of the first Thanksgiving. There aren’t really any turtles in it, but the story ends in a big feast, so that’s good in my book. If you think about it, it is kind of like the Thanksgiving celebrations people have today. We bring in a big harvest from the grocery store. There is typically a big feast of favorite foods. In my family, we play board games and watch football on TV after the big meal. As at any gathering, everyone talks and shares stories, memories and news about other family and friends. If the family and friends aren’t there, then that is a kind of news called gossip.

Thanksgiving as we know it, with the turkey, stuffing and football games, wasn’t realized until 1846. A lady named Sarah Josepha Hale, editor of a magazine called Godley’s Lady’s Book, campaigned for an annual national thanksgiving holiday. She thought it would be a good tradition after she was inspired by literature about the harvest gathering of 1621. It wasn't until 1863, when President Abraham Lincoln declared Thanksgiving a national holiday to give thanks. Here we are, over 150 years later, still thankful. Please pass the gravy.