The Story of the Three Greenies 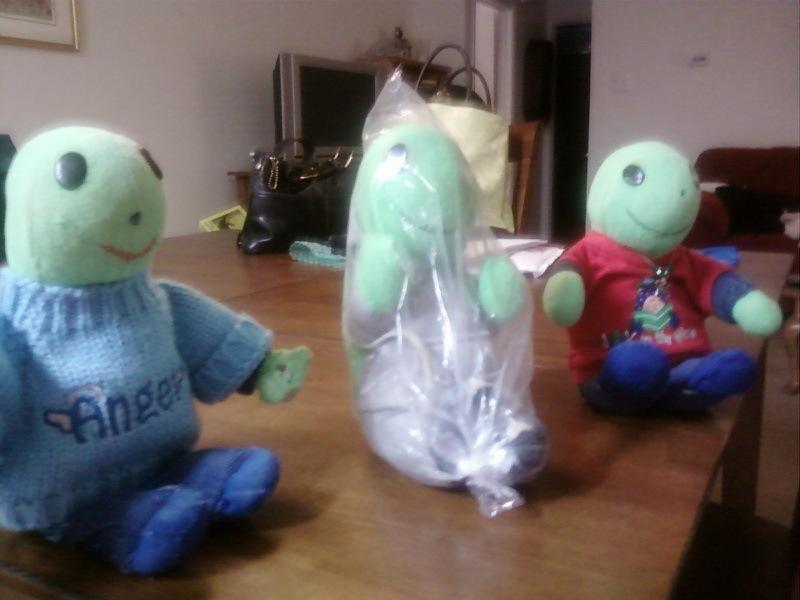 I don’t know if you know this about me, but I have two brothers. There are actually three Greenie brothers. I, of course, am Baby Greenie. I’m the baby brother and the ring-leader of the trio. Even though I am the baby, I am actually the oldest Greenie – just trust me and don’t overthink it. I was picked out of all the other toys in a toy store in Boston, Massachusetts by my Mama. It was destiny! And yes, I totally have a Boston accent.

My big brother is Five-Year-Old Greenie (“Fivie” for short). He got his name when he (and our little girl/Mama) was five years old. That was the biggest age he had ever been at that time and it was a big deal, so the name stuck. He is good-natured, sweet, smart and patient. We are often told we are total opposites, whatever that means… but I say that no one should ever underestimate Fivie. He can be a real thug when he wants to be. I think it’s because he has a shady past as a turtle bribe. You see, he joined our family during a visit to New York. He was seat-belted into a car driven by our Mama’s aunt, Aunt Kafreen. Fivie was there to entice our Mama (a toddler at the tim) to get into the car without giving Big Mama a hassle even though she had not ever met Aunt Kafreen before. It was a setup and Fivie was the bait! This is why I like to say he has a criminal past, but he doesn’t like it when I say that and he sits on me until I apologize. He must have been a good con artist, because the plan worked. Mama got in the car with Aunt Kafreen and Big Mama (my Mama’s Mama) and Fivie and I met each other for the first time in the car. We were a dynamic duo for many years after that.

New Greenie came from eBay. Actually, he arrived in a box in the mail from Knoxville, Tennessee. He has the distinction of being the first Greenie to embark on postal travel! We first saw him online when my Mama was online researching the toy company that made us. She said something about rebates and suing for damages, but I’m not sure what that was about. Anyway, she found a Greenie, a real one, just like me and Fivie on eBay! She told Fivie and me and called Big Mama. Of course everyone said “buy him”! So she did. She bid $8.00 (plus shipping) on him and we had a brand new Greenie! The internet is a wonderful thing! He really was new, too. He was still in his original plastic packaging and everything. Since New Greenie came from eBay, he likes technology and gadgets. He is fun-loving, spunky and likes playing jokes…on me…all the time. Suffice it to say, New Greenie fits right in. That’s how we became the Greenies, a trio of turtle brothers.