By Land and Sea… 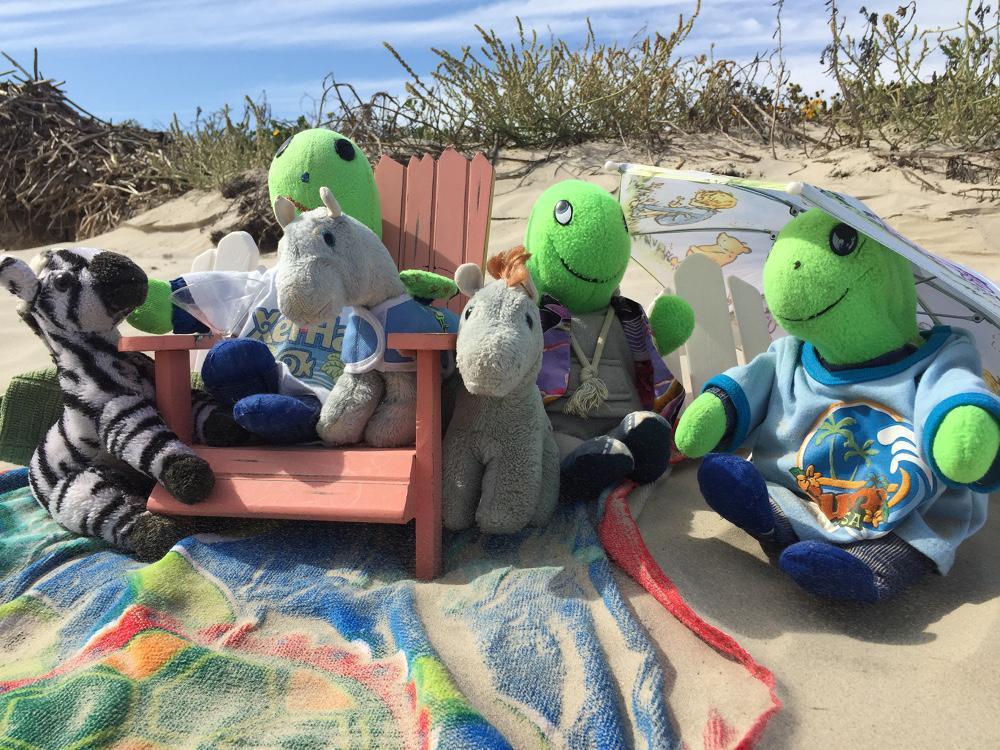 I’m not a sea turtle, but I sure do like to go to the beach! My friends and I have been to the beach a few times as my Mama grew up. It’s always a lot of fun to dig in the sand, bask in the sunshine and see the great big ocean. Whenever my brother, Fivie, sees it, he stares in awe and says, “The ocean is SO BIG!” He often remarks on how big the world is. It’s kind of his thing.

Greenie and Friends Go On A Beach Adventure

On past trips to the beach, my Mama and her family swam in the ocean waves, close to the shore. As I mentioned before, I’m not a sea turtle, and those waves look really huge to me. I stay on shore and play on the sandy beach.

My friends and I were all talking about the beach one day when Zippy started asking a lot of questions. He wanted to know if the ocean was like the bathtub. He thought that the bathtub held an awful lot of water.

That was when we realized that Zippy had never been to the beach before. Then again, knowing Zippy…maybe he had been to the beach and just didn’t remember it. There’s no telling with him. Anyway, he was clueless about what the beach looked like. We tried explaining it to him again. He asked if it was like the big pool my Mama and Thomas used to swim in in the back yard.

“No,” we explained. “The ocean is much bigger and the beach is sandy and not grassy like the back yard.”

Zippy was confused and made a face. Then he made another face that let us know that he had an idea.

“Let’s go to the beach!!” He shouted excitedly, jumping around. “Right now!” he continued. “I’ll get my socks and bicycle!”

Now we were confused. The beach was far away and we weren’t sure what Zippy thought he would do with socks and a bicycle on the beach. Everyone walks around in bare feet or sandals (without socks) on the beach and it’s too hard to ride a bicycle in the sand.

“What!??” I exclaimed at Zippy, getting ready to tell him he was a maniac. It probably wouldn’t have made any difference. Then Fivie stepped in.

“Wait, Baby Greenie.” Fivie, said. “Zippy doesn’t know about the beach, the sand and how far away it is. I’ll explain it to him. Why don’t you go and talk to Mama to see if we can take a trip to the beach one of these days to show it to Zippy.”

“Yeah!” Said my other brother, New Greenie. “I’ve never been to the beach either. It sounds very interesting and I want to see it.” He piped up. I realized he was right. We haven’t been to the beach since he joined our family.

“Ok, why don’t you come with me? We will tell Mama.” I said to New Greenie as we slid down the side of the bed on our shells and hit the floor running. After a quick conversation with our mama, she agreed to set up a beach visit. There was one catch, she said.

“Greenies, it’s not summertime right now. Typically, people go to the beach in the summertime, when it’s warm enough to swim. It’s October, now and autumn. We live in Texas, so it’s still warm enough to visit the beach. However, it is too cold to swim. But if the weather is nice, we can play in the sand and show New Greenie and Zippy how big the ocean is.” She told us. “I will talk to Big Mama and Big Doug and we can make a day trip of it! Go find your beach towels, umbrellas, lounge chair and outside toys. Help New Greenie and Zippy get organized for the trip.”

The very next Saturday, we were all loaded into Big Doug’s truck and on our way to the beach. The two Bluies came on the trip, too. They had been to the beach with us before, and were eager to go back. On the way there, Zippy kept making up and singing songs about going to the beach. His singing was very loud and his lyrics were all wrong because he didn’t understand much about the coast. We had to distract him by pointing out landmarks along the wayto make him quiet. Other than that, it was a fun car ride.

Finally, we arrived at the beach! For once, Zippy was silent because he was dumbfounded by the vastness of the ocean. New Greenie spread his arms as wide as they would go and said, “Fivie was right. The ocean is so, incredibly big!” We all jumped up and down as soon as our toes touched the sand.

We set up our lawn chair, our umbrella and our beach towel. We played all afternoon. We dug in the sand. We built a sand castle, which Zippy crashed into and knocked over as he ran around excitedly. New Greenie spent a lot of time just gazing out to the sea. He really liked the beach! We told each other stories about the fish, pirates and submarine adventures in the sea. It was kind of windy on the beach, since it was autumn. We didn’t mind.

After a while, Zippy got a little blustery himself and announced that he was going to go into the waves and swim out to the deep water. He thought he would be safe since he was wearing his lifejacket. We told him not to go into the deep water because it was too dangerous for a little Zebra to go alone. He wouldn’t hear of it and started marching toward the ocean. He marched out into the soft sand. He marched and marched…and marched. It’s hard to walk in the sand because it slides beneath your feet so much. Zippy was starting to realize this and his legs were getting tired from all that marching in the sand. The waves still seemed so far away from where he was in the middle of the beach by himself. It was hard for him to move around in his big life jacket. It was late afternoon and the wind was picking up. The sand was really starting to blow around and gather at Zippy’s feet. We were no longer worried about Zippy getting lost at sea, but that he would get buried in the wind-driven sand! He turned around and looked back at us, whining a little. He looked back at the ocean waves and took a few more ponderous steps, his puffy life jacket weighing him down.

Finally, he couldn’t take it any more. He sat down in the sand, tipped his head back and wailed. Big Mama had been watching him the whole time. Once he started crying, she strode in to his rescue, picking him up and bringing him back to us on our beach towel. Zippy was happy again once he was playing with us again. Pretty soon, the sun was setting and we were all getting hungry for supper. We left the beach with sand in our fuzz and smiles on our faces. We’ll be back again one day!